MY TRIP TO THE SPA 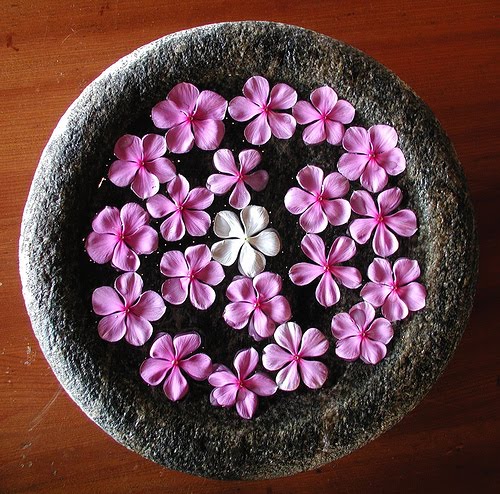 I don´t mean to whine but why do spas have to cost so much? Now that I live in Europe I see certain advertisements of chocolate covered faces, fruit & herb baths, clients in one of those fluffy white towels getting a massage, etc. The price is a crime. Especially when internationally there are such economical versions of the spa around the world.

The year we lived in Morocco I visited the public bath called the hammam. It cost 70 cents. I was there for at least 2 hours. OK, so it wasn´t exactly the pampering kind. The floors were hard tile (and you had to sit on them). My neighbors stared at me. I had to haul my own buckets of water. It was stressful linguistically for me. BUT I always came out feeling amazing! When I took my two girls, they slept like logs afterwards. I felt a part of the female community in a small way. And the price was right!

The Turks have a bath that is quite famous and I really wanted to go when I made it to Istanbul one time. But we were just passing through and would have been relegated to doing a pricey tourist version so I had to pass it up. (After all that shwarma, baklava and Turkish Delight, I was pretty much out of money anyway.)

Then I was in Indonesia last year with Mr. Adventure visiting some friends and we got to go to the FISH SPA. No, I am not kidding. See? 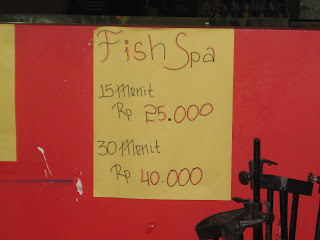 The price was right so he went for it! 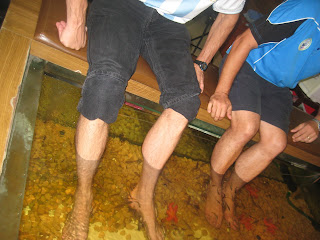 So, here´s how it works...you put your feet in this pool...and the little toe-jam eating fishies eat all your dead skin cells! Isn´t that amazing? 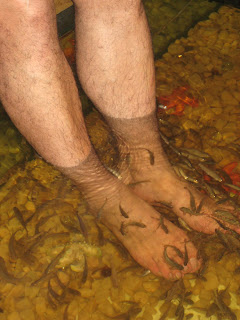 Here´s the close-up. Yes, it does tickle. 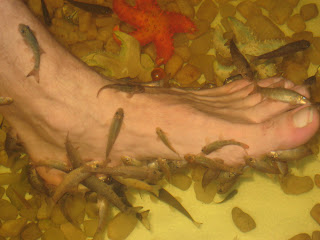 There was a female client who was there getting "preened" but when my husband & his friend stuck their feet in there, they abandoned ship for this fresh carnage who had never-before-been-cleaned-at-the-fish-spa feet and gave them a lot more to work with! Did I mention that these fish had never seen a foot larger than a size 5? This was a BIG day for them. 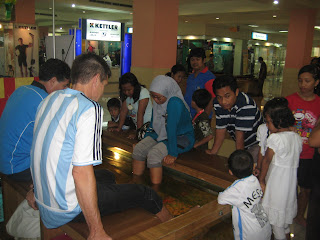 My girlfriend and I decided on a foot massage for about the same price. 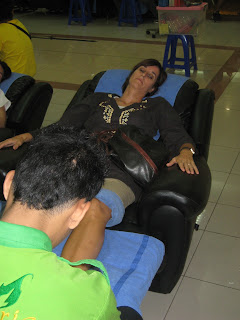 Do we really need to have a vote on who made the better choice here?!!

So, while I am terribly curious about European spas and somewhat jealous of those who can afford them, I am thrilled to have experienced some international we-the-people versions of spas. Plus, I can take advantage of my international spa know-how and use my Moroccan scrub of puréed olive pits or my Dead Sea masque from Jordan. Haven´t made it to the pet store for fish yet, though...

Labels: Global Nomad, Laugh Your Way Around the World