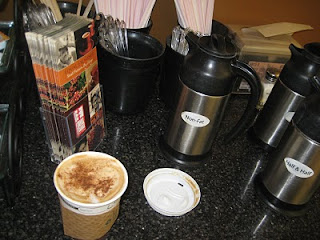 I confess that I feel cheated at times by not having experienced the Starbucks phenomenon in the US. While it was happening, I´ve been living overseas having other cool experiences. But when we return on a trip it is bizarre to see its permeating thread running through the culture I grew up in, with its tendrils of influence in the society I thought I knew.

Secondly, what impacted me was its language & culture. They expect you to learn - and order effectively - exactly what you want in Starbuck-ease. They sell you a lifestyle with your coffee. It grabs you with its values, its traditions, its ambience, its worldview. It welcomes everyone (willing to spend 3$ plus on a coffee) as a member of its society. They confidently expect you to return - and we do.

It took me 5 trips to Starbucks to figure out how to ask for what I really wanted the first summer I was back. On one of my early trips I was behind a little old lady who, poor thing, asked for "a cup of coffee". After they explained all the lingo she whimpered, "I still just want a cup of coffee" and walked out! But I did like that once I figured that out I could go anywhere and know what I was getting. When you´re in a café elsewhere in the world, coffees vary. Even at the same café, your coffee can be slightly different and from café to café they can vary greatly. But sometimes that is a good thing.

I like variety. I´m a sucker for presentation. I love having coffee with a friend. I like a comfortable chair and I love to read. And I enjoy the smell of coffee even more than its taste!
I´m a great candidate for Starbucks but alas! I live too far away from its influence.

BUT during all the years of the Starbucks phenomenon, I have enjoyed hundreds of espressos and cappuccinos at ordinary cafés in Argentina, Morocco and Spain, the places I´ve lived. People have gathered for centuries at these to talk, sip, relax, argue, do business, read, study, kill time, get ideas, problem solve or fall in love. Perhaps, after all, I´ve enjoyed the Starbucks Culture all around the world without even knowing its name.

I enjoy an occasional coffee at Starbucks when I travel and I love to linger there. But Starbucks has nothing on the perfect, strong coffees around the world set in their quaint streetside café packaging. I´m truly glad to be bi-cultural and enjoy the best of both worlds!